How to vote about merging of Ubuntu and Linux? [closed]

There are two identical sections:

They should be merged. Where to vote on it?

I think all members of Linux and Ubuntu should be allowed to vote.

Does SE has this voting feature at all?

I know the arguments of separation proponents (one of them is that Ubuntu logo is more beautiful, than Ubuntu tag).

Ah, you're two years too late for this, see:

The Unix & Linux community seemed to have favoured merging the sites: 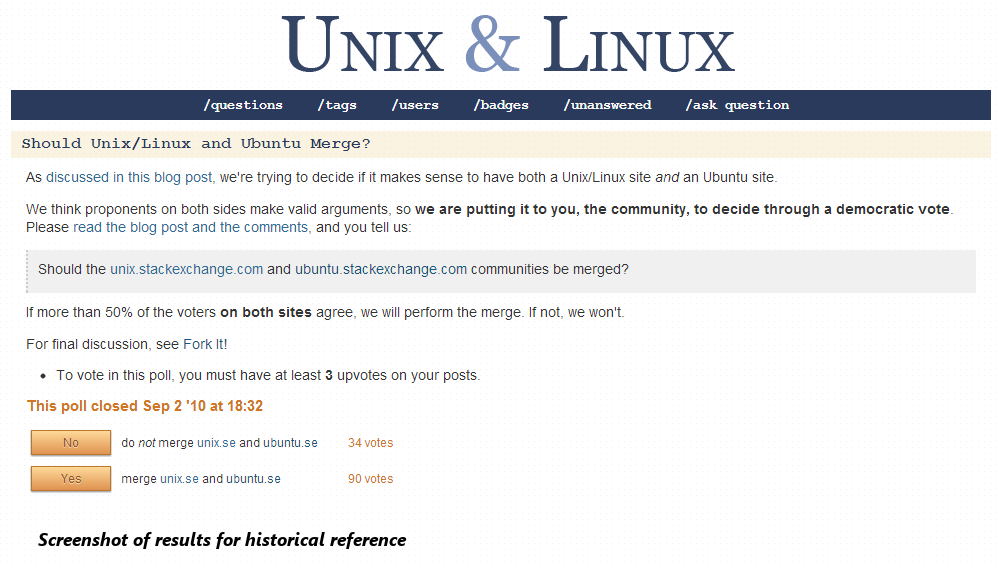 ...but the AskUbuntu community didn't: 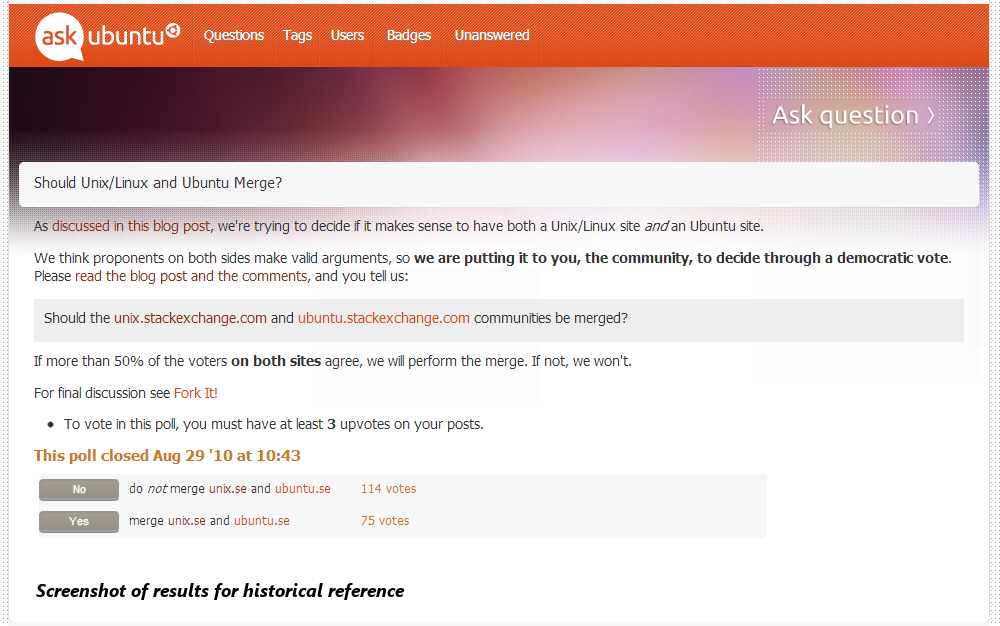 Both sites are doing fairly well, and although the fragmentation may be a bit confusing at first, there's little chance (if any) of merging them now.

Besides the reasons given by Yannis Rizos' answer, this won't happen since they are not identical (despite looking so at first glance): Ask Ubuntu is for Ubuntu-specific questions (using e.g. Unity and all its features, PPAs, Launchpad etc... - asking questions about other distros is disallowed, and will be migrated to Unix & Linux or closed) and Unix & Linux is for general UNIX/Linux questions which might be not distro-specific at all (e.g. awk and sed questions).

As for the differences between Unix & Linux and Ask Ubuntu, gilles sums it up nicely in his answer to this question: Ask Ubuntu, version 2.0.

Ubuntu sets up a core environment that most Ubuntu users stick to. That makes Ubuntu different from most other Linux distributions. Ask Ubuntu allows answerers to provide an Ubuntu-specific perspective to all questions, which a tag on a wider site is not quite as conducive to. There is a difference in treatment between ubuntu-tagged questions on Unix & Linux and questions on Ask Ubuntu. Ubuntu users who don't care that there are other Linux variants — which is the majority of them — get more useful answers this way.

21
Where did the 'close' link go?
0
Why was my question about definition vote gaming deleted?
1
Just a thought: Another voting category for a 'good example of an off topic question'
18
Instead of creating many language specific sites, shouldn't we expand the multilingual features of the original one?
10
Why do Meta posts giving advice on how to vote get down voted?
3
How can I gather publicity about my proposal?