I accidentally committed to a site as an unregistered user - how can I undo this?

A while ago I committed to the Chemistry stack exchange proposal. I already had an account on physics.stackexchange.com, and I intended to commit using that account, but instead I ended up committed as an "unregistered user". (I don't remember exactly why that happened, but I do remember that the process of committing was pretty confusing. There was a box saying "real name" and I was like "huh, that'a bit weird, but I guess at some point it will ask me to log in to my account and my real name won't be published", but no, it just published my real name and created a new account-that's-not-an-account-because-you-can't-log-into-it.)

Update: This specific situation was resolved by one of the Chemistry.SE mods merging the two accounts. (I think I asked on their meta as well. This was a while ago now, and Chemistry.SE is now in beta.) However, the more general question about how an unregistered user can manage their account and commitments remains unresolved.

The way to resolve it is to ask to merge the unregistered account with the other account.
The only way I see to do this is to click on the contact us link visible on Area 51, and explain what happened.

On the other Stack Exchange sites, the "contact us" link doesn't send an email, but opens a page where you can ask about merging two accounts you have. 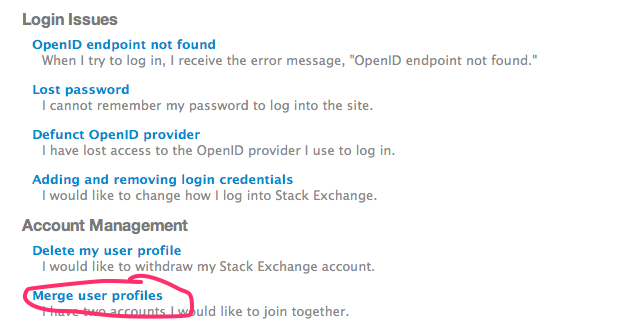 Area 51 is still using the old code. Probably they are waiting to change the "contact us" link after they changed the rest of the code as per the "Area 51 version 2" changes.

If you have an unregistered accound you will have to re register. If it will not allow this action using your email address then you have a registered account. Then you'll change your account username and password. If all this fails to resolve the issue, create a new email and register again. Hope this answers your question for you.

Well i think i can help u coz d same thing took place wid me.You simply hav 2 follow the steps like : 1.Try selecting from the options given on ur webpage lik "Try alternative loginif u already hav account on stack exchange,facebook,google,etc". "They wil b represented in some blocks and u just hav to select one of them. 2)just thats all,and ur account is regestered.later u hav 2 verify from ur alternative login account and u wil get points 50+ for that. Well and sory coz i too dont know d asnwer of how 2 delete ur user account coz i m also new here and the option for alternative login will be available 2 u on your main page.just beside the place where it is written that ur an unregestered user,there r two options,one for edit other of my login.so u choose my login there.

Not the answer you're looking for? Browse other questions tagged area51-meta support .

0
Please can a moderator delete my “unregistered user” commitment so I can register using my StackExchange account?

2
I accidentally registered a new account when trying to commit to a proposed site. How to undo?
8
Don't tell me that a proposal is “over halfway to beta” unless it's meaningful
12
In which way does signing in to a proposal with my real name assure the site will have an active community?
16
It is not obvious enough when committing that your commitment is only counted if you confirm your email address
6
How'd I get into a Private Beta with no commitment?