On Area 51 it is not possible to flag a proposal to close it, the flag dialog shows a set of options that is different from the ones available when flagging a question on other Stack Exchange sites. 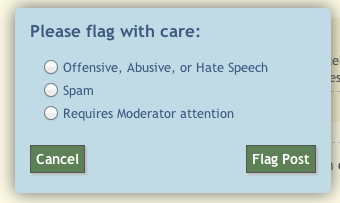 If users who cannot vote to close find a duplicate proposal, they can only flag for moderation attention, which is a flag not visible to the users who have access to the moderator tools (10k users); using that flag doesn't allow other users to vote for closing the proposal, if it is really a duplicate. This means the community is not involved in a decision that should be taken from the community.

If moderators are human exception handlers, how can the community take a decision in those cases?

What to do now:

Just flag it for moderator attention; there are only 5 10k users who would be able to see the duplicate flag. Two of those users haven't been here for six months, and could hardly be expected to look at the review queue. Only one's been here in the last couple days, and wouldn't accomplish anything.

Why this sub-optimal solution is required

Remember that you need 5 votes to close something. Assuming that an Area51 "Vote to close" chat could be constructed, that the 10k users publicized the "vote to close" flag queue (unlikely since two of the remaining three haven't been here for two weeks), and all the 3k and up users (note: vote-to-close is a 2k privilege, I didn't have time to get these users as well) participated, how fast would stuff get closed? I tabulated the "last visited" times of these 56 users, and calculated an average last-visit time of 88 days. Only 10 if the 56 were here in the last week, and only 24 were here in the last month. Here's the histogram: 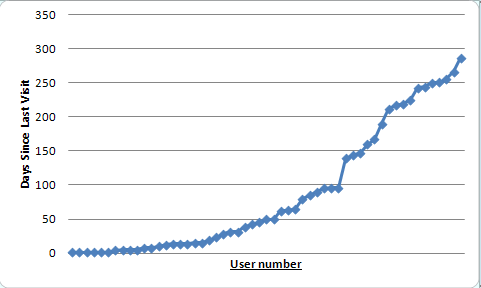 This isn't exactly a healthy profile; it's hard to count the active users at the bottom of the graph! I think it's safe to say that implementing this suggestion would accomplish nothing except for making flaggers feel better.

Why do we have this problem?

This is a symptom of a broader quality problem on Area51, caused by a trifecta of problems, namely:

Users who want to participate in nurturing new sites have very few options. If a proposal is in the "Definition" phase, they can follow it, suggest questions, or vote on existing questions (with a small number of available votes). There's not a lot else to do besides wait for the proposal to go to the Commitment phase. Once it's there, there's even less to do: Commit and wait for beta, maybe participate in a discussion, but not much else.

This isn't healthy. If users could do more with the site while it was on Area51, perhaps asking detailed questions (impossible due to the character limit), or (gasp) answering those questions, they might be encouraged to spend more time here.

The users who have high rep are almost invariably those who have started proposals. The system grants a lot of rep to these users (+5 per user who follows or commits to your proposal), that's at least 1500 rep (minus losses due to the rep cap) for a successful launch (100 followers and 200 committers), which might only involve writing in the title and a brief description. An idea isn't worth this much. As evidenced by the histogram, these users don't stick around after their proposal is started, and they aren't real likely to participate in closing proposals and other cleanup efforts.

Who should have rep? People who are active on many sites and have rep on those sites. Activity on Area51 is a strong indicator, but it's insufficient and inaccurate when coupled with successful proposals. People with lots of rep on other sites on the network are likely to be highly qualified on Area51. Rep on MSO or per-site metas is probably a stronger indicator than rep on the main site, but total network rep, flag weight, edit count, and meta rep are all decent indicators.

To use some real examples, kiamlaluno, has accounts on some 42 sites at the time of this writing, including 16k on MSO, 23k on English, and 15k on Drupal. 472 rep is not indicative of the level of trust that the site ought to be able to give to kiamlaluno. Instead, the site gives 12k of rep to Binoj Anthony, who gained much of that through his 3 proposals, and has 5k of rep on SO, 197 on SU, and only 122 rep on MSO. He hasn't fulfilled his committments on any of his proposals, and only has an account on one of the two beta sites. Similarly, Jaydles has 10k of rep on Area51 from 5 proposals. He has 2k of rep on MSO, but that's the highest other account. He's fulfilled his commitment to one of his three betas. (Please don't be offended by these direct statements, I'm not trying to call either Binoj or Jaydles out for poor behavior, just indicating the problems with the system).

Current policy: Let the broken windows take care of themselves

If a proposal loses momentum, it may be re-evaluated or merged with similar proposals. Inactive proposals that do not receive any activity for one month may be deleted. Deleted proposals can be re-proposed anew by users with renewed energy and, hopefully, better resources to bring it to commitment.

This is not a good mechanism to maintain a vibrant site. It leaves sites like microprocessing, which the author agreed was a duplicate, and has received one close vote, but is otherwise languishing in inattention to be deleted once I stop checking back to see if it's been closed for a month. The few moderators and Stack Exchange employees who visit from time to time wait interminably to close proposals, leaving a site to wallow in a slow trek towards the next phase, and when it reaches that point, then judgement is issued. Hopefully these issues are addressed in the pending redesign.

Not the answer you're looking for? Browse other questions tagged area51-meta feature-request .

7
The superimposition condition on Area51

21
Where did the 'close' link go?
9
Lengthen the aging period of close votes on example questions or get rid of it altogether
18
Instead of creating many language specific sites, shouldn't we expand the multilingual features of the original one?
18
'% Answered' does not show the correct value in site statistics
33
Rushed proposals and Community Moderation