The mathematica proposal at 89 commitments has disappeared without warning or trace.

Why has it disappeared? And why without prior warning?

A case for the Mathematica proposal

I find Robert Cartaino's answer highly unsatisfactory and epitomizes the typical "meh" responses that are doled out on Area 51. It's unfair to criticize proposals for languishing on Area 51, when the voting process was clunky to begin with. Mathematica was one of the proposals that went into commitment soon after the new voting rules were introduced, which suggests that the process might've had something to do with it stagnating. Since then it has racked up 92 commitments in about 2-3 months, which isn't that bad at all. Last I checked, there wasn't a must have X commitment by Y months, else it'll be closed rule.

I couldn't care less which other proposals are launched/canned and I'm not even going to try and compare with them. To me, they're as useless as hamburger flavored perfume. I'm going to try and make a case for the proposal, staying as objective as I can.

Most, if not all, Mathematica tag users are NOT programmers first:

This point has been made by others, but it's worth reiterating. A quick glance at the backgrounds of users active in the tag reveals a broad list in science/engineering including physics, mathematics, economics, material science, cognitive science, etc. I doubt if any of them would even consider themselves hard core programmers first. By restricting users to Stack Overflow and keeping questions strictly programming oriented, you're losing out on a lot of interesting questions that require a bit of domain related expertise and the users on SO have shown that they're willing to learn a new domain to answer a question if it's on-topic and interesting. 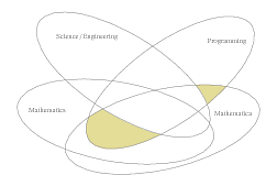 Some example questions that are representative of this set are:

However, the Mathematica community has been quite welcoming of questions that stray outside the typical Stack Overflow question, or in other words, there is some programming, but it comes in only tangentially, as a means to achieving the end goal. I don't think I would be exaggerating if I said a good chunk of our questions belong to the blue set. 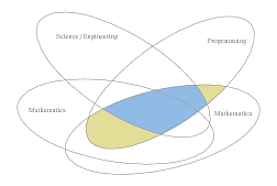 Some examples that come to mind:

However, these are exactly the kind of questions that have attracted drive by users who vote to close it thinking it is NaRQ or that it belongs on Math.SE. It gets even worse when the question requires a lot more domain expertise than the average programmer has, as can be seen in Listing all interesting sections of a tetrahedron, especially this answer. It is an utterly unhelpful answer, and the user is near hostile in the comments. To quote a couple of comments:

So the problem is not a programming problem. This is a mathematics problem. Or are you looking for help generalizing the code to compute this? We can help you produce compilable code to test it, work it out. What we can't do is help you reduce the problem to a fundamental set. That's the realm of the mathoverflow people. How does this problem remaining open help you? How can SO help you here? That's all I'm saying. The original question is some months old and MO helped you find a good 7d simplex case. So.... – jcolebrand Nov 3 '10 at 21:03

So what is the problem? You have code, you have a specific solution. You need to reduce it to the general solution? That's a math problem. You need help parallelizing it? That we can help with, but you have to formulate the question. – jcolebrand Nov 3 '10 at 21:29

I have downvoted the answer above, but that really captures the essence of how Stack Overflow users misunderstand the nature of Mathematica questions or the capabilities of Mathematica. Most users might have encountered a computer algebra system (CAS) such as Mathematica or Maple to "magically" find the roots of a polynomial and have a notion set in stone, that only calculus TAs use Mathematica.

We'd really like to see a lot more of these interesting questions, but in a place where it's explicitly on-topic. Not circumventing the masses by virtue of having a few 3k/10k users. Given the background of most Mathematica users, I'd say we'd all enjoy and envision a site where questions in science/math/programming that can all be solved by Mathematica can be asked. Something like: 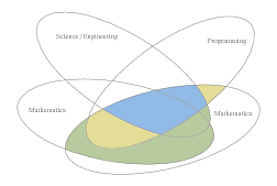 You claim that Mathematica is also covered by Super User, Stats, Mathematics, Physics, Code Review, etc. Have you see what percentage of users active in Stack Overflow are active in any of those sites? I know that a lot of users prefer using comp.sys.math.mathematica for such questions precisely because a lot of us are not interested in following a bunch of sites for the sole purpose of looking out for such questions. Shouldn't a subject that can be asked on 5-10 different sites have a site of its own? That would seem to me to be the logical way to go about it.

There's a whole lot more that Mathematica can do, especially with graphics, plotting, data manipulation, prototyping and testing complex models rapidly, even creating presentations like Powerpoint/Keynote, all of which don't really fit any one set in particular. There're plenty of questions that could be asked about creating demonstrations or using their computable document format (CDF) or even querying Wolfram|Alpha properly and interfacing with Mathematica (although this is a lot simplified now with v8). Some examples:

What we're really gunning for, is a site like this, where anything about Mathematica is on-topic. 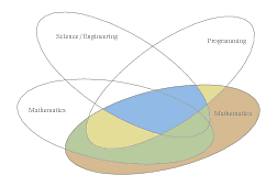 Hey, where are the experts?

Among the users in the Mathematica tag who have a bronze badge, I know of at least 6 employees of Wolfram Research (including a few on the Kernel development team), at least one expert user who has written a very popular book on the subject and a whole bunch of expert users who have been using Mathematica in some way or the other for 10-15+ years and have shared information on their blogs/websites/other fora for years. If these users don't constitute a pool of "expert" users, I don't know what will satisfy you (Robert).

To put the closure of this proposal in C# terms so that you better understand our stance, it's as if Anders Hejlsberg, Eric Lippert, Jon Skeet, Marc Gravell and a whole bunch of experts committed to a proposal and you slam it shut because you think it's a flaky proposal.

Granted, we're not as big as C# and our users don't have 100k+ reps and we won't get 10k+ questions/month, ever. If your goal is to mint money off of Google Ad sense, well, then we're not the right proposal to pick. You were wise to go with Sex.SE in that case (you're probably not making money off of our tag on Stack Overflow anyway). If your goal is truly, as is often claimed, to make the internet a better place, I must protest the closure of this proposal and urge you to reconsider your decision.

I hypothesise that the proposal has been closed for the same reason that it was opened: non-Mathematica users just don't get it.

There have been many cases of Mathematica questions on SO that have attracted erroneous close votes from non-Mathematica users who think such questions belong on math.SE. There are many Mathematica issues that are not, strictly speaking, programming issues and actually don't belong on SO. We've gotten around that SO by being a bit liberal in our definition of "on-topic" there, compared with other tags.

I also note that the "lack of support" argument made in Robert Cartaino's answer is not consistent with the reason cited in the close notice: "This proposal would tend to drain audience from an existing Stack Exchange site." Either the proposal doesn't have enough support, or it will drain audience. It can't be both.

As noted in comments, closing this proposal and leaving Windows Phone open is inconsistent, especially considering the larger absolute user base of Windows Phone.

An update: The Mathematica proposal has not disappeared, it has been reborn!

We went from proposal to commitment phase in less than four days. We got to 100% within 23 days of the first commitment, so only 27 days after the proposal started.

Maybe it took the slap on the face of being closed to rally the user base. Certainly it has bolstered our enthusiasm to create a great site for programmer and non-programmer users of Mathematica alike.

We still think the reasons given for closing the original proposal weren't correct (or at least have been inconsistently applied), but we have responded constructively and come out of it stronger.

Look forward to seeing the site on a StackExchange network near you very soon.

It hasn't disappeared. It is right here: Mathematica [closed], with the announcement issued from the resulting discussion…

Mathematica question do indeed seem to be covered by our other Stack Exchange sites, among many others: Stack Overflow, Math, Stats, Super User. That, plus the 17-month trek it took to get the site this far has shown us that, at this point, this proposal would not produce a viable Q&A site. – Robert Cartaino♦ 20 hours ago

There may be questions in Mathematica that are not covered by our current sites, but that cuts down the potential scope considerably. Factor in the lackluster support for this proposal, and the proposal was simply not viable in its current state.

We may one day have the audience to create more one-product, spin-off sites like this. But Mathematica has slowly and painfully just barely made it this far and has months to maybe another year to go. It's hard enough to create a viable site when you have an avid, enthusiastic audience, but this kind of lingering support will not make a working site. It will launch to an equally lack-luster opening and will hardly be used because because it has no momentum and few avid supporters.

Area 51 has its share of challenges in attracting a larger audience, but that doesn't change the viability of this proposal as it stands today. It needs a stronger showing at this stage or the site will simply fail. We've tried launching proposals from a similar state and it's a painful pattern to perpetuate.

Not the answer you're looking for? Browse other questions tagged technology science discussion .

18
When a proposal is closed, don't remove it from the user profile of users who committed to it
-2
Should swift get it's own Q&A site?

4
What happened to the Medical Imaging / Neuroimaging proposal?
12
How to promote the Bitcoin & Crypto-currency proposal to high-reputation users?
1
Why was the future studies proposal deleted, but less frequented and older proposals still exist?
7
What will happen to the SO Mathematica tag after this proposal becomes active?
10
What does it take to spin off a subtopic site?
4
The last 10 yards ( 10 more commitments needed )
6
A Community Promotion Ad might help boost the commitment level of the Retrocomputing proposal
1
An area for Sagemath software
2
When will the proposal Augur enter the beta stage?