On one hand there is the bug which causes people's Area51 accounts not to link properly with their StackExchange Network profiles:

On the other hand there is a bug with email verifications, even for those whose Area51 and SE network accounts have successfully been linked and have been labeled as a "Registered User":

Here I will give evidence of how this email verification bug is manifesting itself in April 2020, with three examples:

A user of StackOverflow for 10 years and 7 months (therefore one of the first ever users of SO, and with 1500+ reputation) has been struggling with this since 20 December 2019: 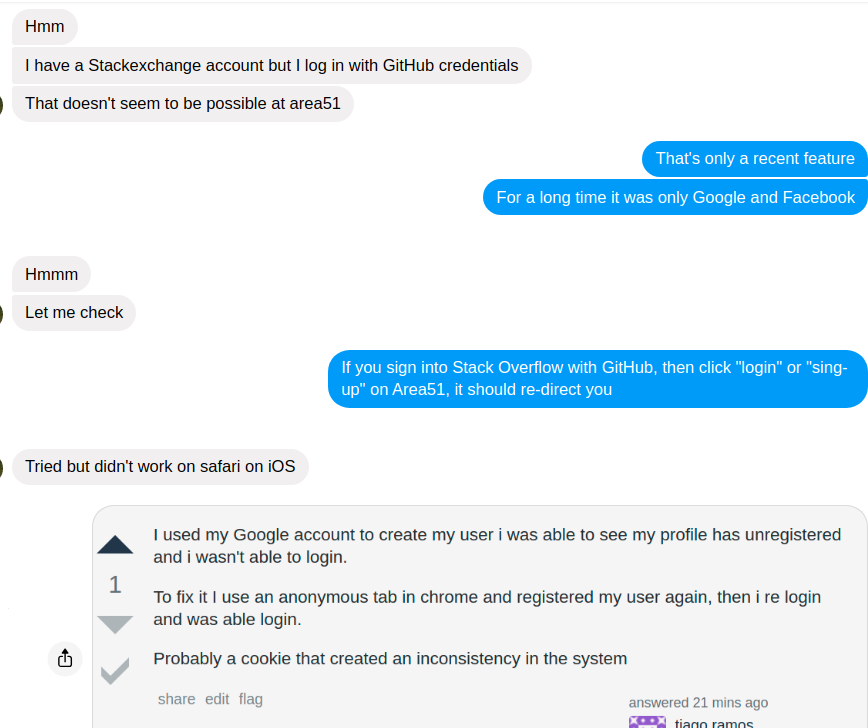 He said that he completed the procedure, but I didn't see him listed as a committer, so I told him he might have to click "verify" in his email, but the message was not "seen" for months, and I hope you can imagine that I don't want to keep nagging and pestering a hard-working and busy friend, so turned my focus to recruiting other members, until 23 March 2020: 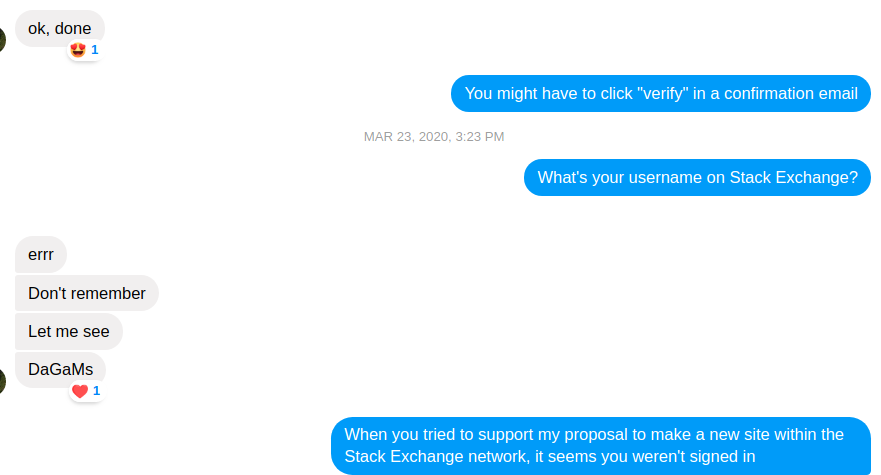 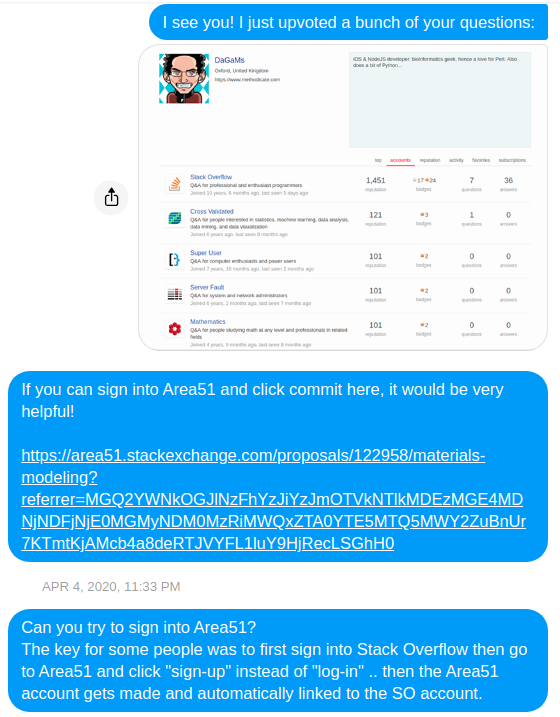 I noticed immediately that his rep was only 101 instead of 151, meaning that his email wasn't verified, but I first wanted him to know that I was thankful for him successfully going through the gruelling process of getting an Area51 account linked properly to the SE network profile: 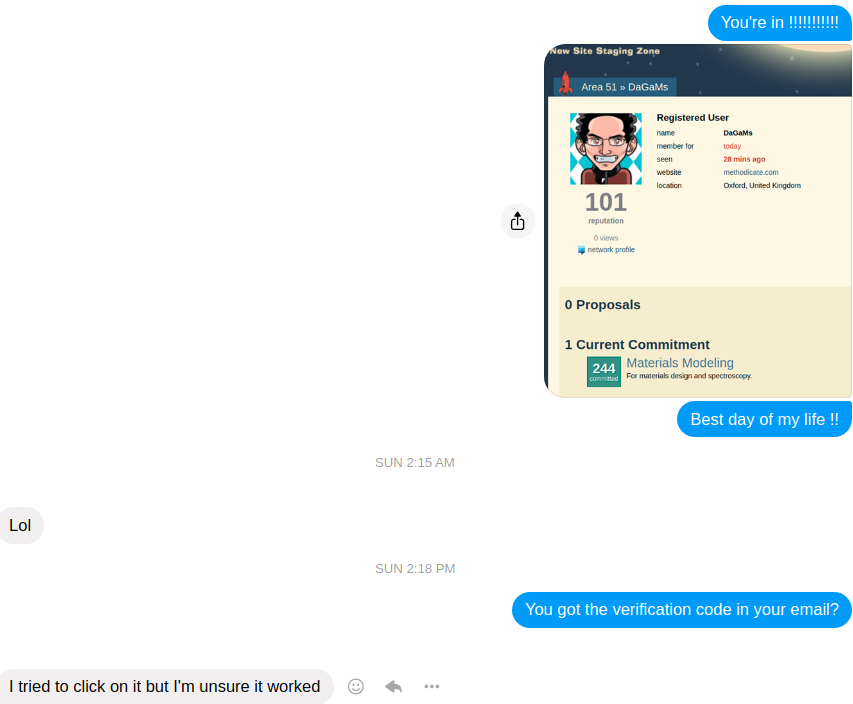 I waited almost 24 hours for him to see my thank you message, before nagging him again about verifying the email: 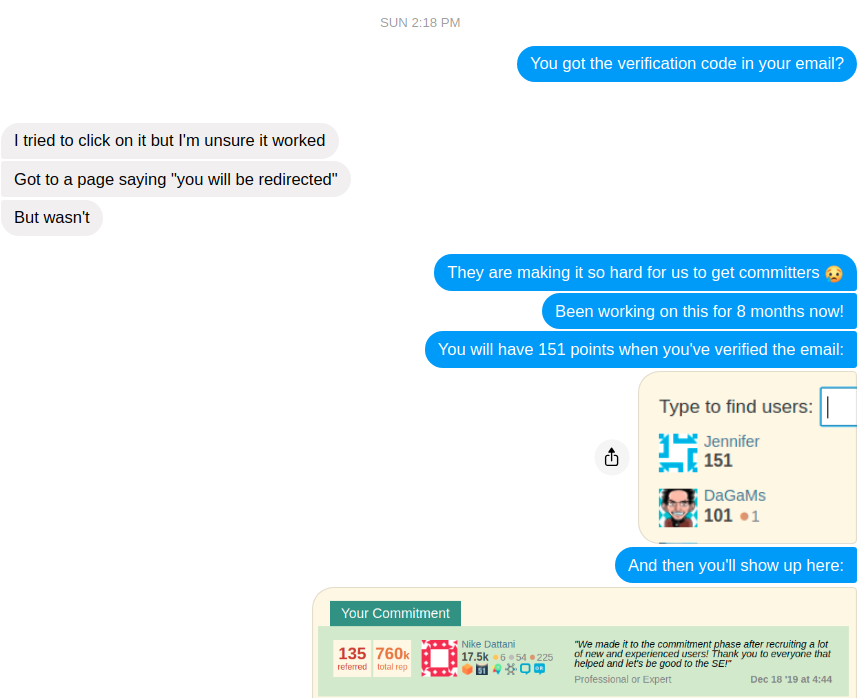 He said that he clicked the "verify" link but it didn't work. Then after more nagging he went back and clicked it and it did work, however his reputation stayed at 101, and his commitment still hasn't counted towards our 100 users with 200+ rep. He saw my last message but hasn't responded, and at this point I don't want to lose a friend over this, so I hope SE can fix this bug without me having to further nag my friends: 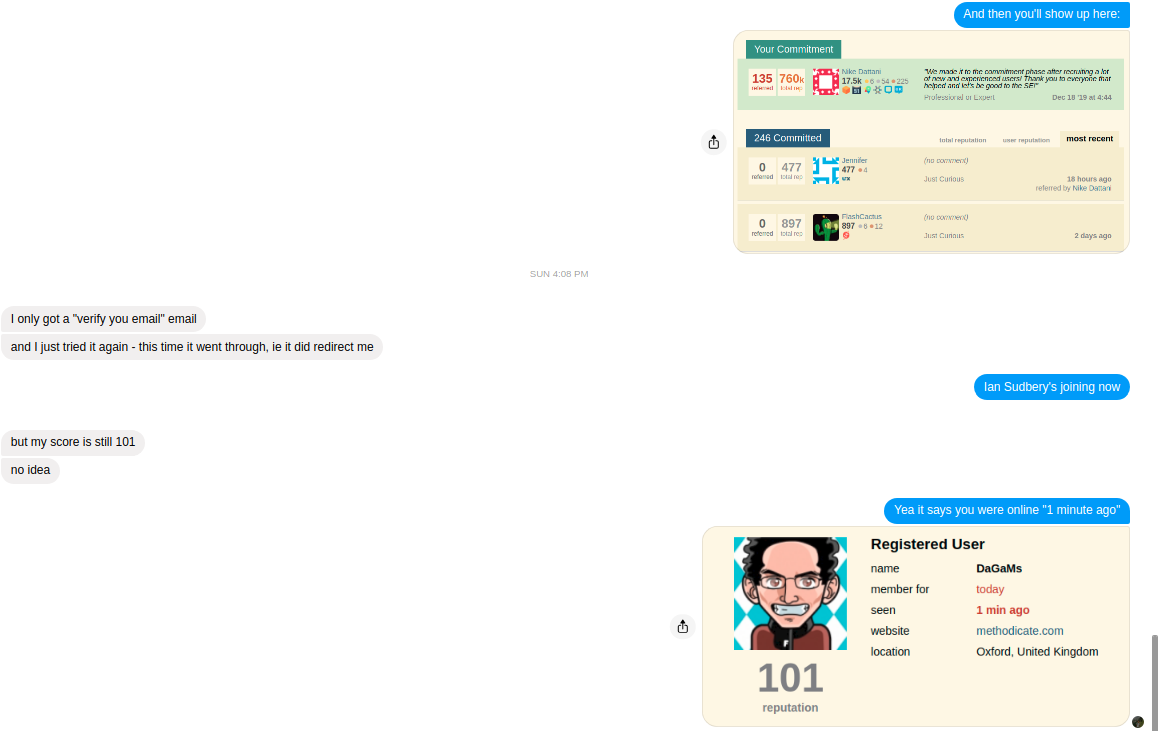 On 19 December 2019 a user with 6 years and 8 months experience in the SE network, and 500+ points on Mathematics SE, began his journey through the following tortuous ordeal, with no success in having his commitment count: 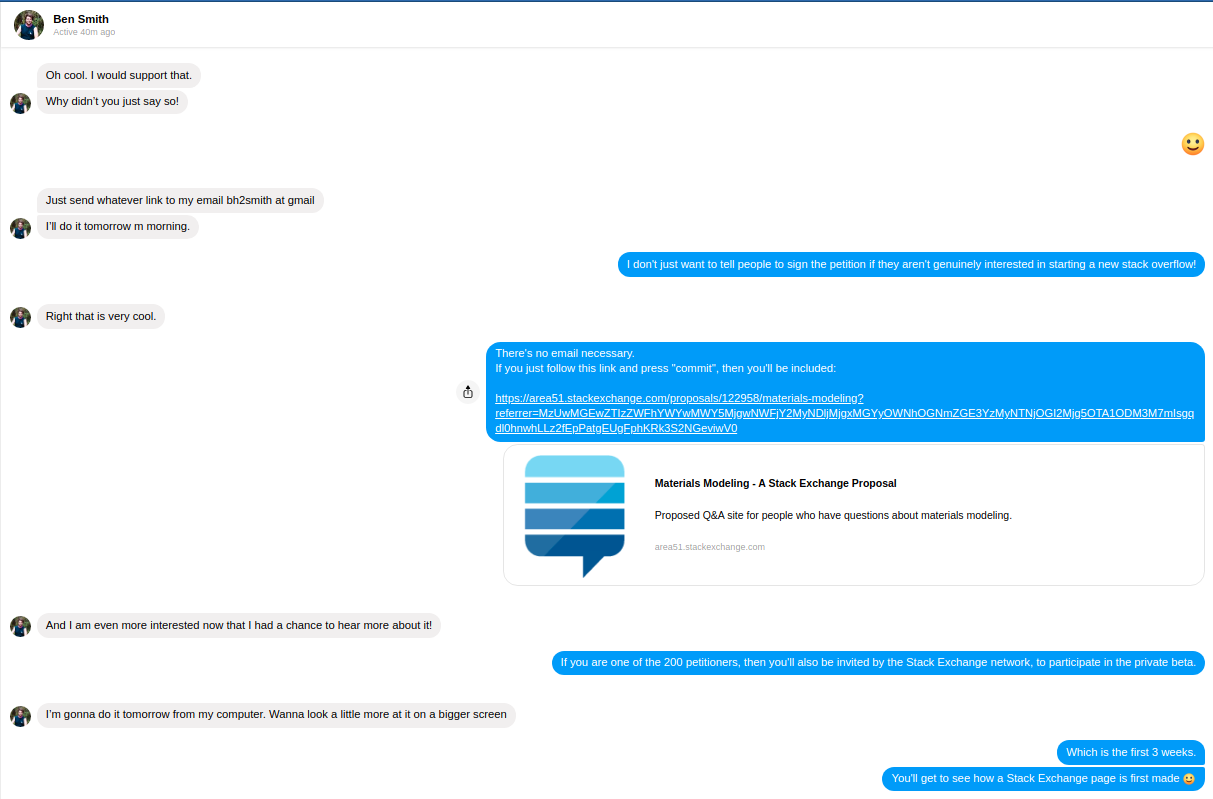 But within 24 hours he was so badly traumatized that he went from saying "I'm even more interested in the proposal" to **"this makes me feel uneasy. Like as if this link is Phishing". 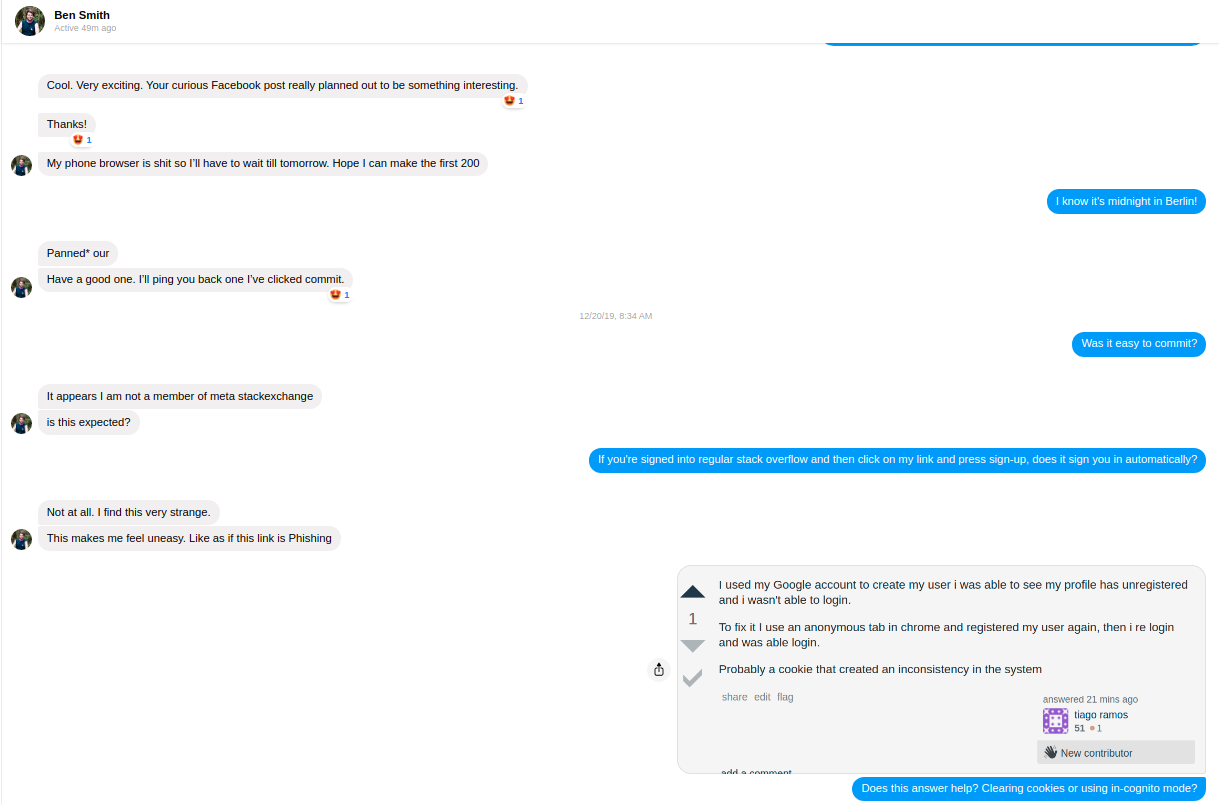 He managed to commit, but not to verify his email. He said he did not get an email: 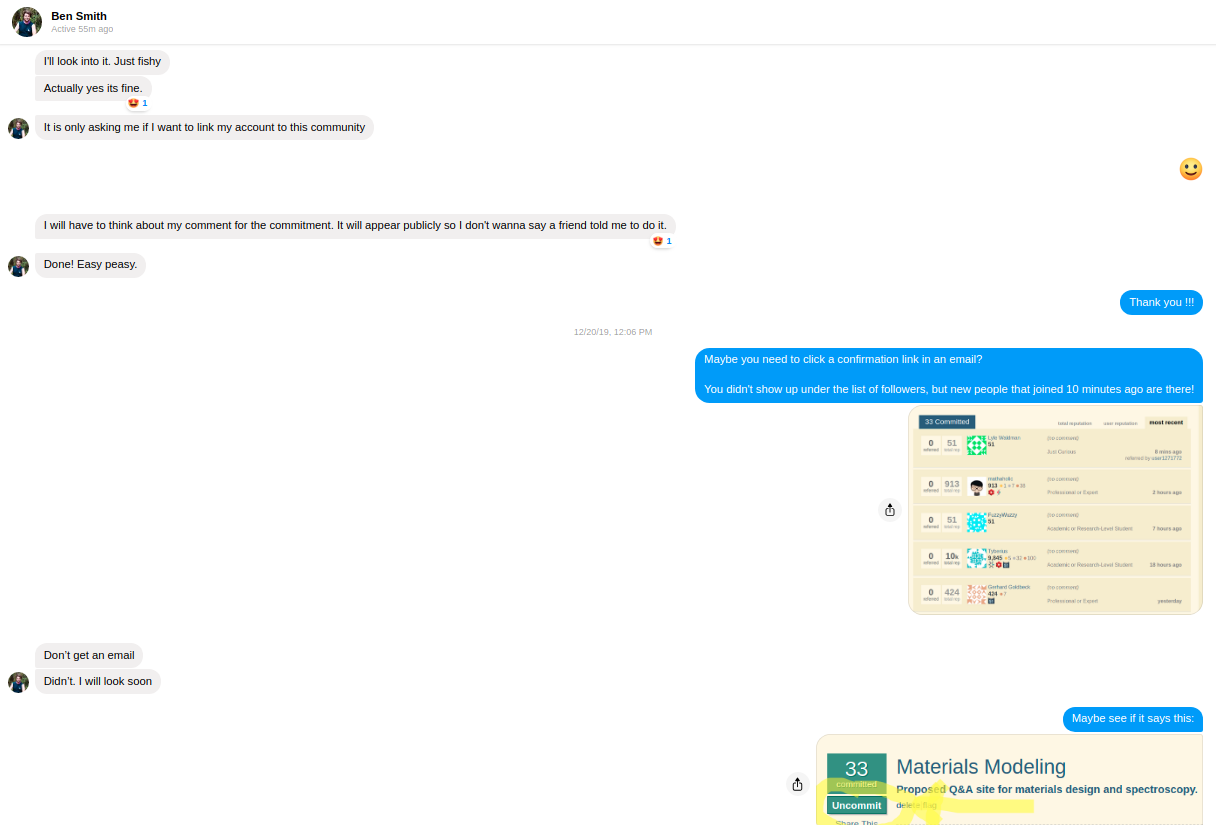 I kept persisting, but he maintained that he did not get any emails: 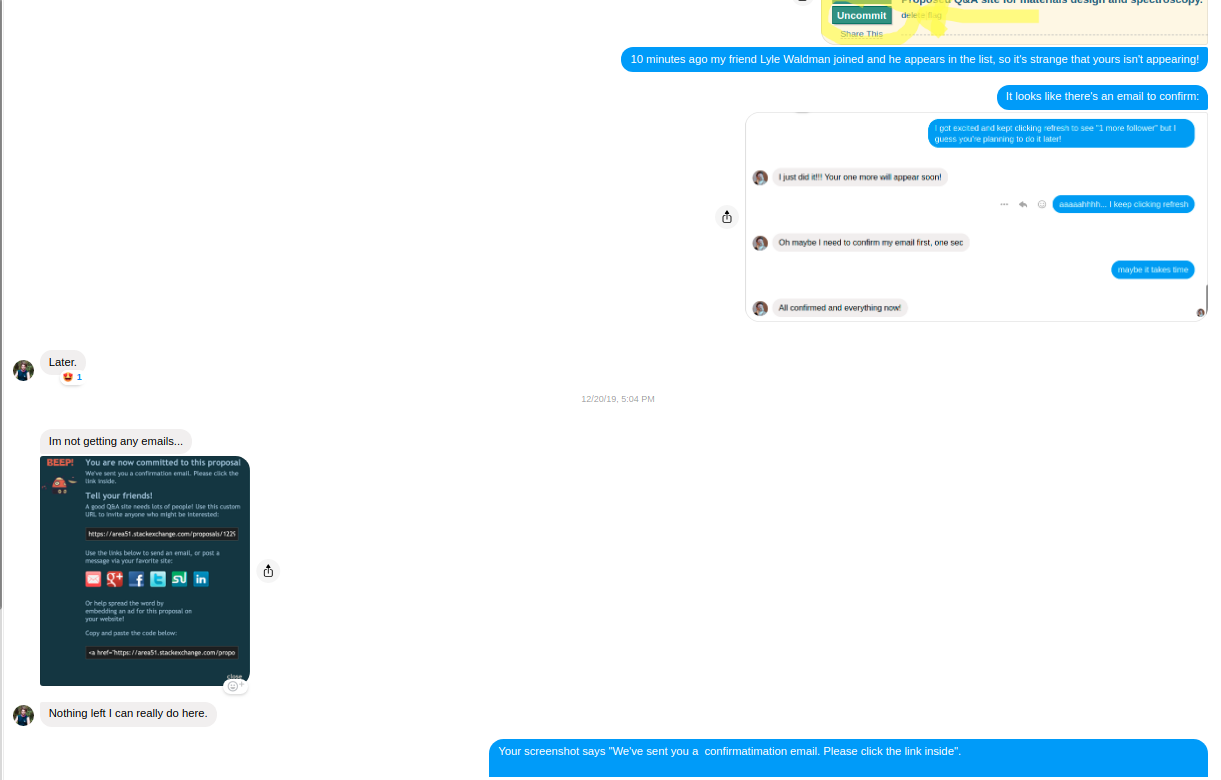 Now hopefully you can appreciate some of the user's frustrations, because by constantly un-committing and re-committing to troubleshoot this bug, he has lost his commitment message multiple times: 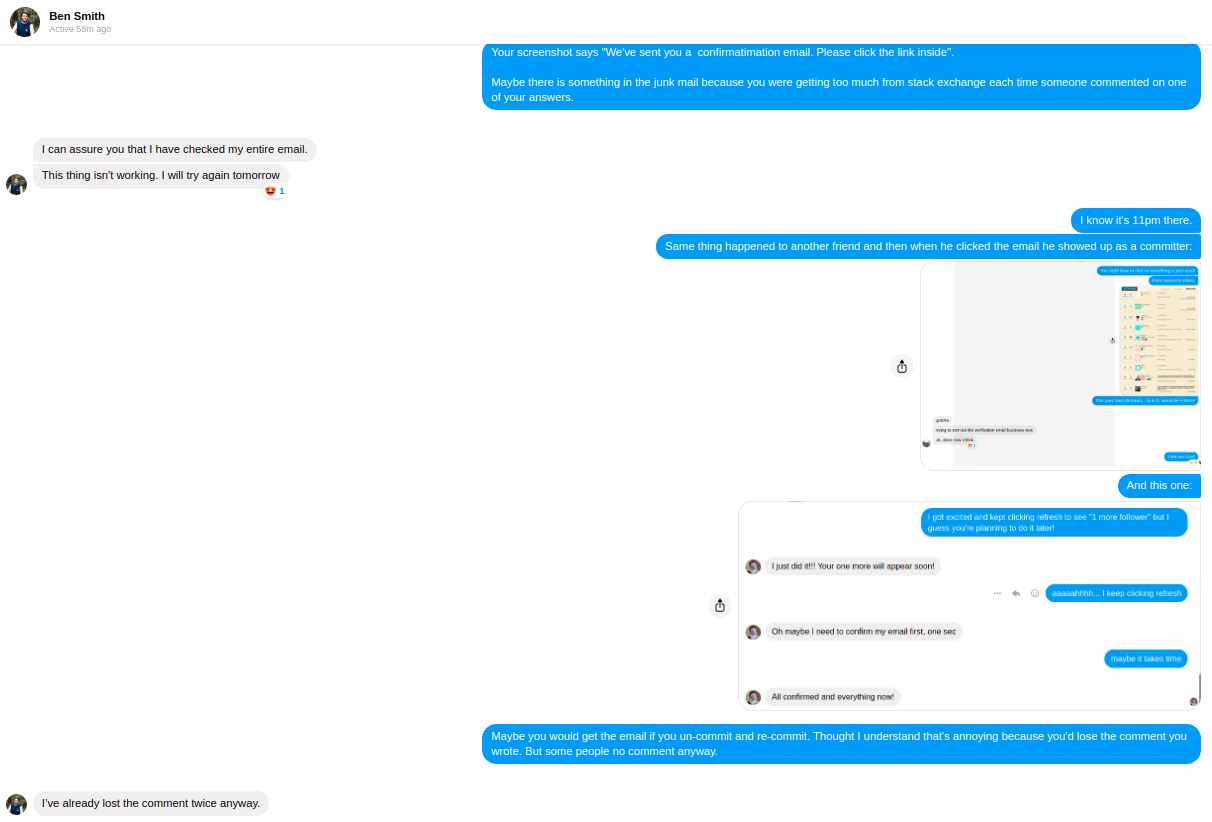 Now as we approach 48 hours of troubleshooting, you can really see frustration as he says "This will NEVER happen:" 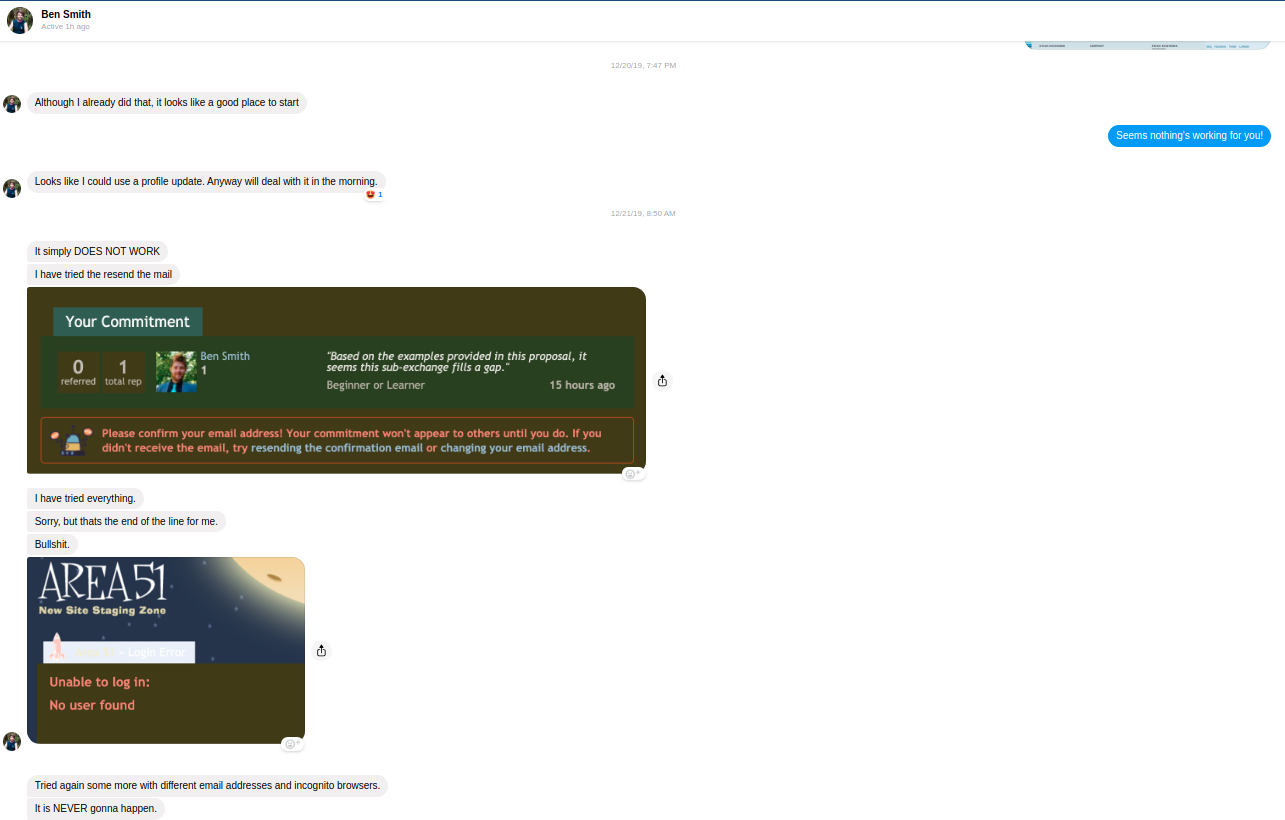 The issue is that he never got the email:

When "registered" users commit but don't successfully have their email verified, at least their profile on Area51 says that they're committed (see Examples 1 and 2 above). This week (April 2020) a user has committed and it doesn't even show up on their own profile.

The "registered" user said they committed, but their rep was still 1 instead of 51, implying their email wasn't verified, but they said they clicked the verify link: 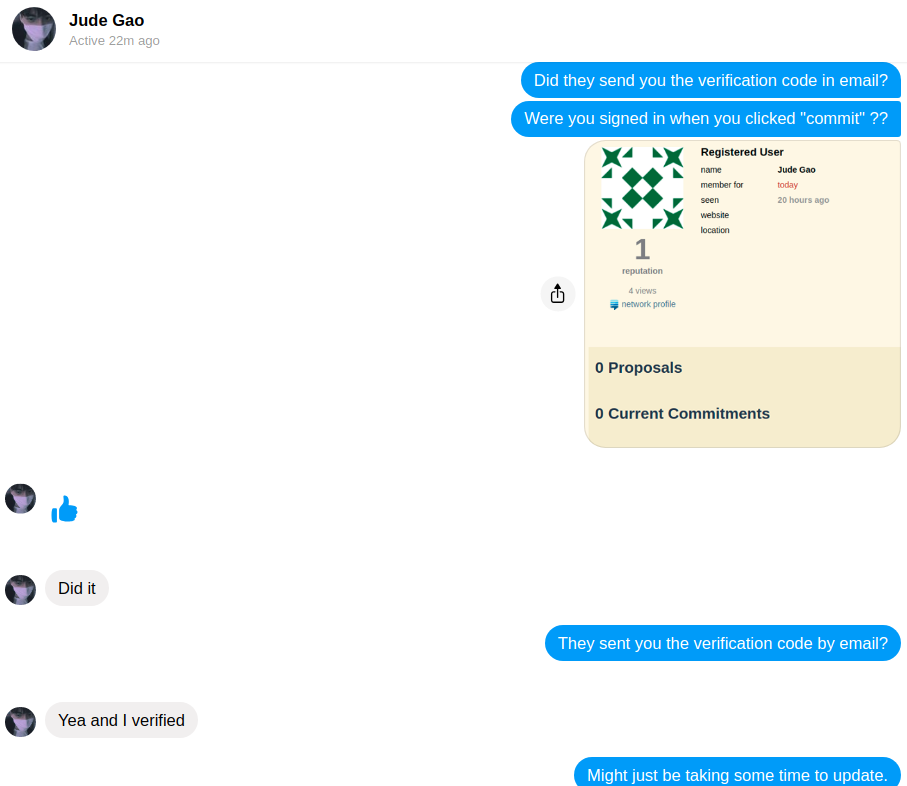 The next day was his birthday, so I did not want to nag him too much about this on his birthday, but eventually he said he did verify the email again, but unfortunately his profile still lists no commitments: 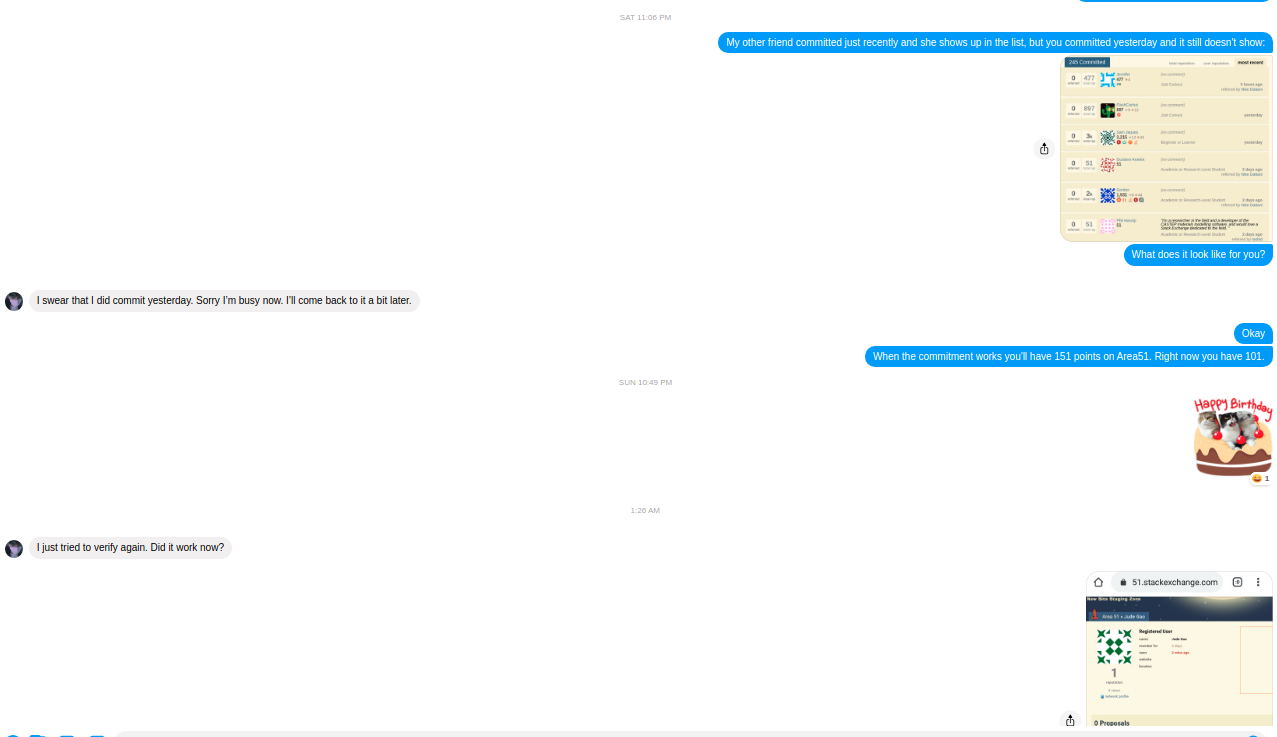 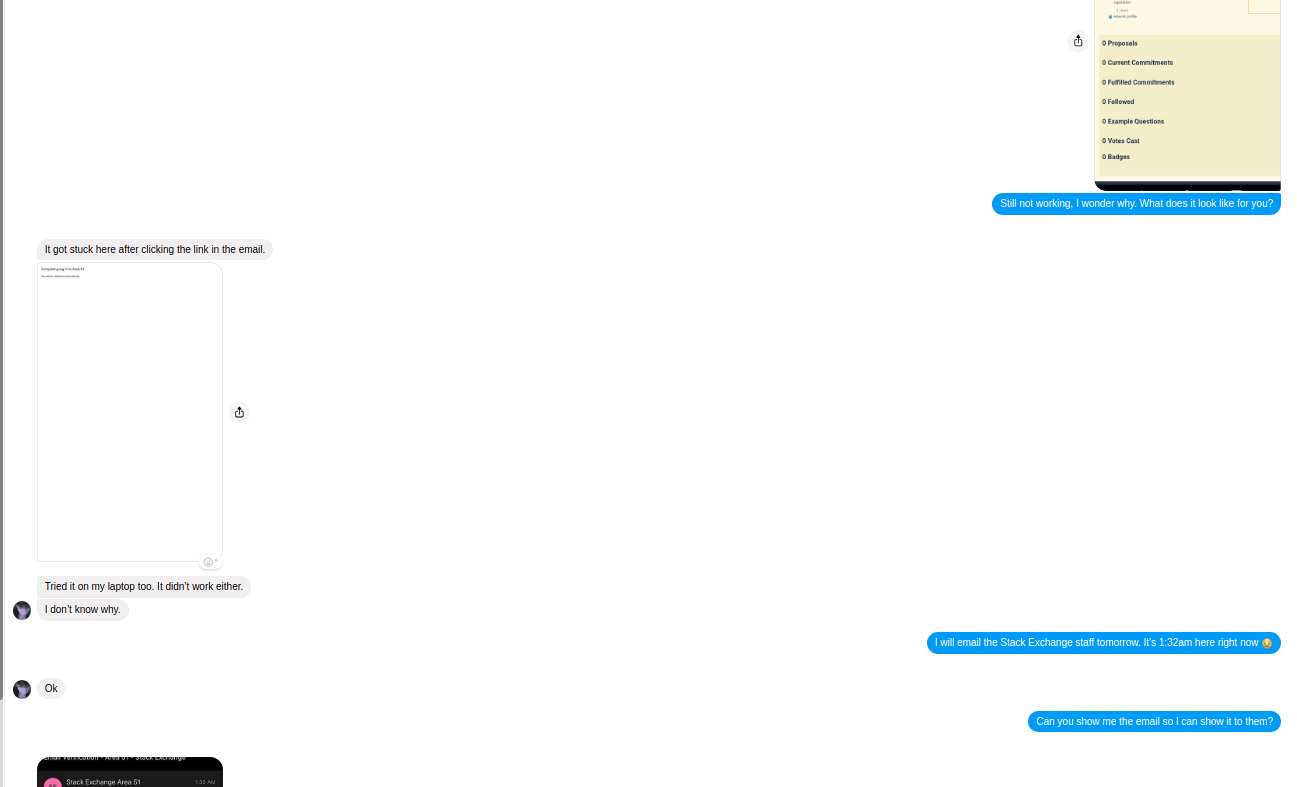 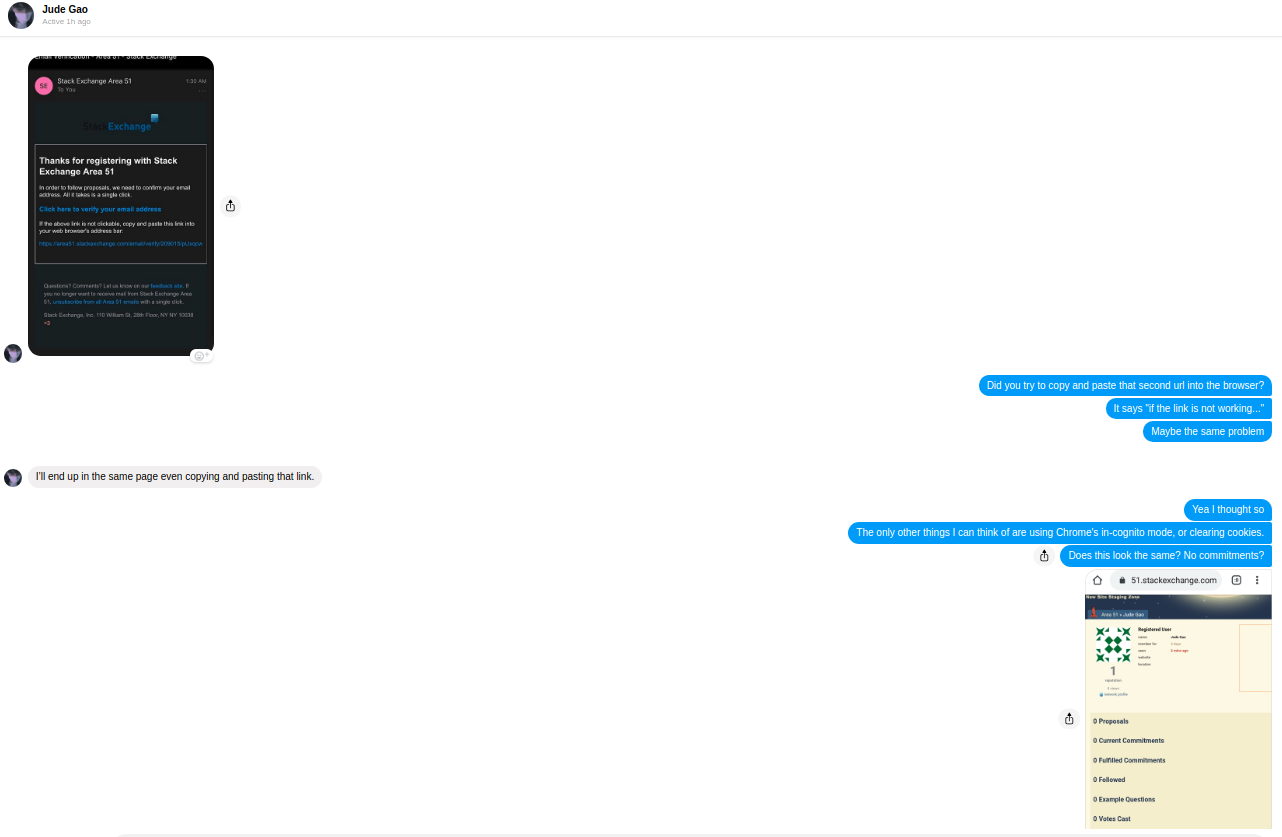 Very sadly, the user ended up saying the 3 dreaded words "I give up":

So now here is my question:

I understand that there is a "contact us" form, but can this bug be fixed (at least for Examples 1 and 2, where the user actually did verify their email) and its consequences rectified without making me ask my (perhaps former) friends to do anything more?

I'll also mention here that the "contact us" form does not work, as I received this email from a user 7 hours ago:

Users have committed, and have 200+ rep on at least one other SE, and are listed as "Registered User" with their accounts miraculously linked to their SE network profiles, but they are not counting towards our 100 required users with 200+ rep because of a bug which is causing their commitment not to count even after they have clicked the verify link in their email. We simply want these users to count towards our percentage. If it only happened once or twice it might not be a problem, but combined with the bug causing users not to be linked to their network profiles, it has resulted in more than 15 of our 200+ rep users not counted, and we only need 12 more to reach 100%.

16
Persistent bugs hindering users from participating: Failure of StackExchange to recognize when Area51 & SE accounts have the same email address
11
User is using two accounts to commit to the proposal
9
Confused by a message about e-mail I didn't catch, am I okay?
17
It is not obvious enough when committing that your commitment is only counted if you confirm your email address
21
Merging and linking user profiles between StackOverflow and Area 51 should be more automatic
12
Please make sure you link your other Stack Exchange accounts!
3
Can a Stack Exchange employee please connect these accounts to their network profiles?
5
Why isn't email validation working when I try to start a new site?
3
A user who posted 11 times in the Beta is not being recognized as having "fulfilled commitment" but users with fewer than 10 posts are
6
You won't be Committed if you don't confirm your email
See more linked questions

4
Error when trying to commit
3
Why am I continously asked to confirm my email address?
16
Persistent bugs hindering users from participating: Failure of StackExchange to recognize when Area51 & SE accounts have the same email address
4
"Unregistered" Users: How does it happen, and will they be invited to Beta?
3
We are in Day 180 and two users have reached 10 posts on the beta, but they are not being marked as having "fulfilled commitment"