Before it's too late, should we expand the scope of the Tamil language proposal?

Recently a proposal for Tamil and a proposal for Sanskrit made it rather far in the Definition stage, with each of them having the required number of followers, but both needing around 24 more questions to reach 10 upvotes.

This time, it's not too late.

Below I show that of the Dravidian languages:

Overall 237.7 million people natively speak the four most popular Dravidian languages, and then there's several more that have up to 3 million each (Gondi, Brahui, Tulu, Kurukh, Beary).

If we expand this to proposal to not just Tamil but "Dravidian Languages", I think there's a higher chance for survival in Area51! 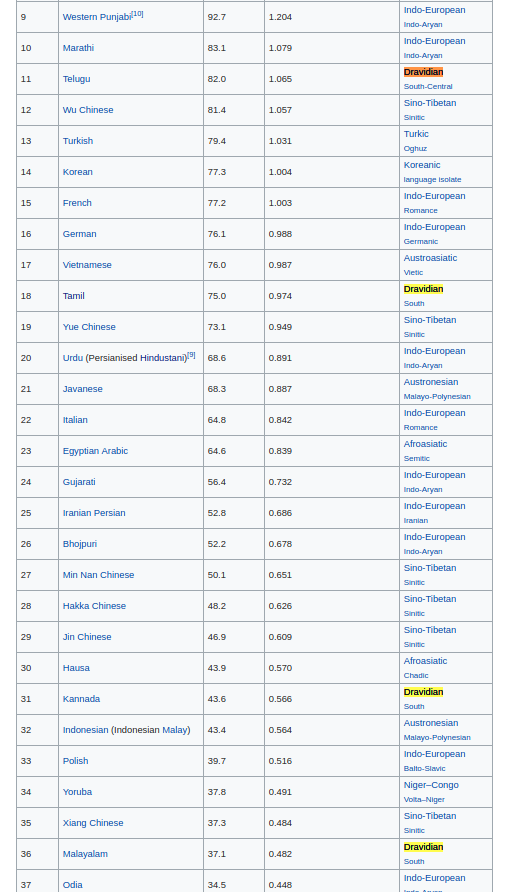 I witnessed and contributed to both of those proposals, so I could see the efforts that both communities put forth. There was much more effort than the average failed proposal, and many people contributed to both. That makes me think that there could be enough shared interest to make a single site. With widespread multilingualism among speakers of those languages, I can easily see a possibility for participants to contribute under multiple tags. English proficiency tends to be higher in the Subcontinent than in many other areas of the world, so we could even encourage users to frame their questions and answers in English so that moderators don't all have to know every language.

What should we call it? I propose

Languages of the [Indian] Subcontinent

After discussion with Robert Columbia, I changed the title to "Dravidian & Sanskritic Languages". This needed to be done sooner rather than later, and I felt now was a good time since only 5 example questions have been asked. This way there's time for the proposal to be made more "evenly distributed".

Why did I go with Robert's suggestion to combine it with Sanskritic languages rather than just expand to Dravidian languages? Two reasons:

Not the answer you're looking for? Browse other questions tagged culture .

13
Persistent bugs hindering users from participating: Failure of StackExchange to recognize when Area51 & SE accounts have the same email address
16
Would a general Languages.SE supersite (synchronized with the current language sites) be feasible?
3
Can a Stack Exchange employee please connect these accounts to their network profiles?
6
A fresh start for Sanskrit Stack Exchange

22
Done! Now restore this site to ESL (“English as a Second Language”)
2
How many days should I wait before I restart a closed proposal?
10
Five more people for the Portuguese Language proposal
9
Four more people for the Korean language proposal
26
What are the advantages of single language sites over collective ones?
16
Would a general Languages.SE supersite (synchronized with the current language sites) be feasible?
6
A fresh start for Sanskrit Stack Exchange