Might it be considered, to add the "new user" box for users of Area51 that are brand new to Stack Exchange?

This appears to be acceptable, because I see other Area 51 proposals where the majority of the "followers" look like they are brand new:

I guess this is encouraged in some sense, since it can help to bring more non-SE users into the SE community; and it is also required that we have our "own" user base and do not rely on previously existing SE users.

However there appears to be no "New User" box for these brand new people.

What I mean is that when a new user contributes to a launched or beta site, there is this box: 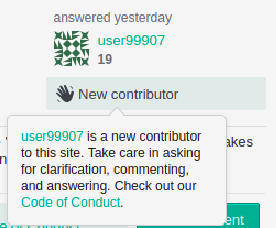 The idea came up because in my Area51 proposal someone wrote a Comment in the "suggest an improvement" box, which seemed a bit aggressive because it contained the language "This has nothing to do with the proposal". The question then got three negative votes, which made me feel very bad for the user because it looks like they went through all the trouble of making an account and confirming their email address just because of this new Area51 proposal, and then when they tried to ask an example question they got 3 negative votes within a day. I also felt really bad because I was the one that posted about the Area51 proposal on the mailing list, so the user probably was joining in response to me, and then something happened which made him/her feel bad.

I commented on the question with some of these sentiments, and emphasized that the user was brand new, and almost immediately two of the downvotes disappeared!

So my question is about whether or not we could have this "New User" box in Area51 just like it is in the Launched and Beta sites? Especially because Area51 is expected to have a large number of new users (as in that screenshot example I provided in this question, and based on the fact that we are expected to "bring our own community" into it).

By the way, I was not overly upset with the user that made the initial comment. I did not "flag" it and I see that the user has voted up on Area51 63 times and down 1035 times, so it is maybe just their tendency to be a bit harsh on Area51 questions, and I am not complaining about any user specifically -- I just noticed that the "new user" box isn't there and I thought it might help to have it!

Area 51 is run on a separate system from the rest of Stack Exchange; Area 51 Discussion runs on the old version of the regular Meta Stack Exchange system.

The "new user" helpbox was added relatively recently, after the change made in the rest of the network.

As such, adding the helpbox to Area 51 would take further development work, which has already been rejected by the company and team because "Area 52" is under planning at this time, and the extra development can be better spent elsewhere (there's plenty of competition for useful changes to the system already).

This is unlikely to happen, soon if at all.

16
Persistent bugs hindering users from participating: Failure of StackExchange to recognize when Area51 & SE accounts have the same email address

15
I accidentally committed to a site as an unregistered user - how can I undo this?
4
Should only registered users of Area 51 be allowed to propose SE sites?
2
Beta Dashboard for Metrics: Private vs Public Beta