How quickly proposal can go into private beta?

Recently I've came across Monero proposal (btw. I haven't heard about it at all until now) and it's already in 19% of Commitment phase with 70 people already committed (as at time of writing) and it was proposed only 11 days ago. I may only assume it was advertised. So this looks like new sites can go from scratch into private beta just as quick as within 2 weeks. 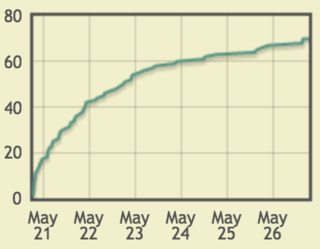 Ignoring some sites which skipped Definition and Commitment, are there any statistics available which show the top quickest proposal which went into private beta (matching the whole criteria for previous phases)?

I'd say that the move from proposal to commitment for the Monero proposal was only so fast because we've had a failed proposal already. Bolstered by that failure, the community was determined not to let that happen again.

According to this post from 2014, the current record holds the Craft CMS proposal which made to private beta in only 12 days.

The second fastest site to go from initial proposal to private beta is Emacs proposal.

Most of the quickest proposals achieving private beta are results of having established previous followers and when the proposal is removed by the system after 1 year, all people are re-joining to the newly created proposal giving the feeling that they're very fast and popular proposals, but in reality their overall time of establishing the large community could count in years.

Not the answer you're looking for? Browse other questions tagged area51-meta discussion private-beta statistics .

3
Dates on the private beta
12
How long is a site in private-beta/beta?
6
Is there somewhere we can see overall statistics of Area 51 proposals?
6
How long does it take to get a private beta invite? Can an invite e-mail be resent?
5
How can I join the private beta site of astronomy?
6
How'd I get into a Private Beta with no commitment?
1
Why I can see this private beta question?
23
What to expect in the Emacs private beta