What can we do to help Woodworking become a community?

How is it possible there's enough interest to field such stack exchange categories as "Amateur Radio" and "Biblical Hermeneutics" but we don't yet have a Woodworking community? It's a 7000 year old trade, it takes a lifetime to become a true master of the finer points, and everybody with a garage occasionally has to dip a toe into the warm waters of working wood. What will it take to get this thing to the next level? What's the next step? And above all what can we all do to help?

Some of the discussions about how to promote the Woodworking proposal are from several months ago. Ever since the community ads on diy.SE went live, the proposal got a big boost in followers and upvotes. A good way of tracking the momentum of a proposal is by checking out the "followers" graph on the proposal definition: 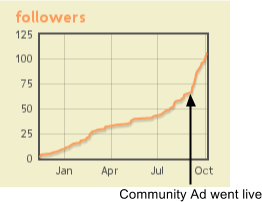 As I said in my comment, I think we're on track and it won't be long now. That being said, the best thing you can do is to keep spreading the word, especially to those that aren't in the stack exchange network yet.

I incorporated the banner into this post at poker SE. I am also helping promote poker SE by mentioning it here.

Not the answer you're looking for? Browse other questions tagged recreation woodworking .

52
Closing a Proposal After 4 Months in Definition or Commitment

9
Where can we get more involved commiters?
4
Can we add mountaineering, rock climbing, snowboarding, mountain biking?
6
Are "Where can I find ____?" allowed?
6
Can I ask questions related to Chess AI and algorithms?
21
Would the Woodworking site duplicate the Home Improvement site?
3
How can we promote the woodworking site?
8
Could posting some Youtube videos help garner commitments?
14
How can we help this proposal to succeed when the previous one failed?