I see that @JoelSpolsky (founder of StackExchange) just committed to the Emacs.se proposal.

A few years ago @JoelSpolsky wrote a blog post called Merging Season in which he specifically argued that proposals for new sites should be rejected if they meet the following conditions:

I can't speak for Joel (I haven't spoken with him about this). But I can tell you what has changed my mind about this proposal.

Last week, I was ready to close this as a duplicate of Stack Overflow. This morning, I woke up to: 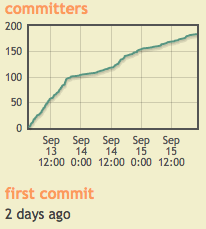 That's over 150 (currently 184 185) people who committed to a proposal over a single weekend. In answer to your question:

So the one thing that makes this proposal viable (according to the original blog post) is if the current Stack Overflow emacs tag users are complaining). Are they?

I just point to the graph above. And it's not as if these people have never thought to ask on Stack Overflow:

The first couple of pages of committers by reputation shows these are folks who are very comfortable with our network, but still want a site dedicated to Emacs. These are people who are voting with their feet. It seems very likely that our existing sites are not meeting their particular needs.

We talked over the prospects of an Emacs site this morning and concluded:

I don't think he renounced anything. I think he committed to participate in a site about a topic he likes. Don't read into it too much.

FWIW, the logic behind letting the Emacs proposal have a shot at life is that condition #1 may not be met. There are many Emacs questions that are off-topic for Stack Overflow, and if that's what this community wants to ask about, they will do very nicely here.

Not the answer you're looking for? Browse other questions tagged technology duplicate .

14
Does this proposal have significant overlap with IT Security?
24
What will prevent this proposal from going down again?
35
Why do we need a separate site for Emacs?
7
How do we (if at all) draw the line between built-in emacs features and user-written packages?
6
Shouldn't it say "Emacs and Elisp (Emacs Lisp)"? Should we make Elisp questions explicitly on-topic?
23
What to expect in the Emacs private beta
3
does this site include questions about developing emacs?
18
Ethereum questions are welcome on Bitcoin.Stackexchange
21
Why do we need a SynBio.SE when we already have Bio.SE, Bioinformatics.SE and researchgate?